Task manager applications are great. They help you get things out of your head and easily accessible. One of the major issues with task manager applications is higher level planning, particularly on the fly decision about committing or not a new project. This is because you need in one look an overview of everything going one right now, including deadlines. This is something not easy to do only with a Task Manager and your electronic calendar apps. Also for what I am thinking about, a planning software is not that useful either. I tried OmniPlan for that purpose alone, maintenance is higher than I would like and I am still not convinced this is the best way of doing it.

In the past, someone had created a Kaban view for OmniFocus 2 (OmniBoard) which shows your active and inactive projects (and a bit more) on a board, kaban-style. This was actually useful but a dimension was still missing: due/end date for long term, higher-level planning.

In the following, I would like to make an argument for a Kaban-Style view screen for projects that could become a 7th viewing mode (there is already 6 by default) in Things 3. In theory, Things 3 has a very extensive AppleScript support and as such the information could be extracted on demands and an external GUI could display there necessary information and make the necessity filtering. In practice, I feel it would be much more efficient to do that within Things and especially with Cultured Code beautiful interface.

Below, I sketched what would be my ideal Kaban-style screen for a higher level perspective and planning overview. Note that the filtering necessary to obtain such a view is, again, specific to what I would like to see but I understand that mileage will vary. As such, one needs a flexible filtering scheme not base solely on Tags (like the rest of Things when looking at tasks) but also include date (due or delay), the presence or not of active tasks in projects and so on. 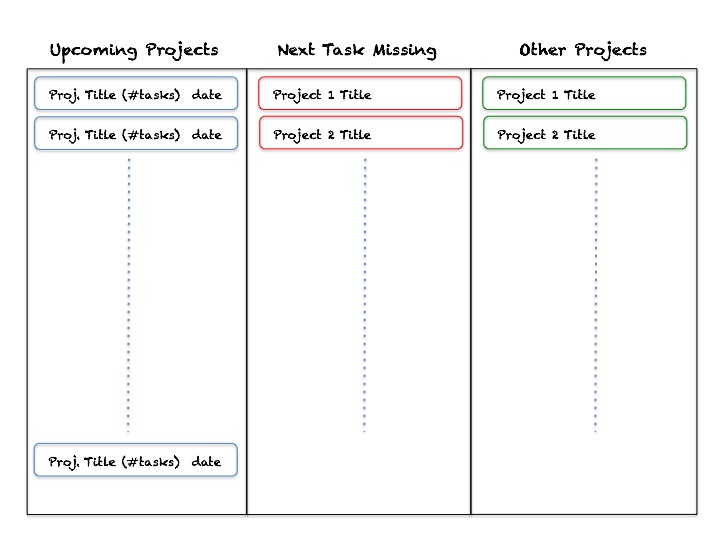 One could argue that there is already a « Project View » in Things and it sits in the sidebar. I would like to disagree with that. The sidebar is nice to navigate into Areas and Projects. It does have some notion of completion via the « pie » icon associated to each project but it stops there in terms of information.  Furthermore, some projects have variable depth in terms of tasks and more tasks can be added as you go. This is a reality in the academic world where projects change orientation or more actions are needed for completion. There are also projects that mainly exist as task collectors (such a daily, weekly, quarterly and annually maintenance projects with repeating tasks).

What is needed is to be able to get a high leave view of mission-critical projects. For me it would be to view short-term (6-12 months, like short research projects, book and review article writing projects and so on), medium-term and long-term (this would be 5 years research grants!) commitments in one pass, from the one ending soon to the last one in terms of execution date, being able to spot quickly projects that lack a next action (in between the regular weekly review or in addition to the weekly review!) and more.

So the proposal is to add a 7th view option in the top of Things sidebar, alongside the Inbox, Today and the other 4 permanent lists. It would look like the one below and, depending on the way you set the filtering options, you could quickly generate any of the three views shown in the first figure above and more!

I think such a feature would solve a long-standing problem with task manager apps, especially for those of us who have load of « commitments » and ease our decision process to be able to say no (or yes) with greater certainty.