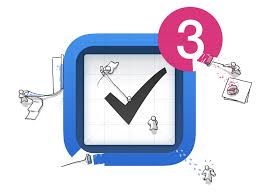 Ever since moving all of my projects an tasks planning digital, I have used a dedicated task manager. I started with Cultured Code Things over 11 years ago with the very first beta; something like version 0.7b – can find my old e-mail about it. When it came out, Things was not only the most intuitive and beautiful dedicated task manager on the market but also the best (at least mac-wise).

I have used Things without any interruption until the middle of 2015. At that time version 3 of Things had been announced for over two years and was still nowhere in sight. Cultured Code drop the user forum after a while. I was starting to convince myself that it was the end of Things. The interface was also such that if you had a lots of projects and tasks (which at that point in time – about 180 projects and close to 1000 actions), it was easy to drop a few of them in cracks.

In the meantime, the Omni Group was introducing OmniFocus 2.0 with a few very interesting features and stricter adherences to David Allen’s GTD approach. What I really like of OF 2 at the time was:

For example, by setting the preferences accordingly, it is possible to require that a task must be assigned to a project and a context (tags in Things or the new OmniFocus 3) to leave the inbox. Furthermore, it is possible to automatically set a given project review schedule at a specified interval (e.g. each week or 2 weeks, …) when it is created. With such strict setting it is impossible to forget a task at all. Once a project reach is set review schedule, it will appear when selecting the “Review” button in OF 2. These two options (combined with the fact that the pro version add Apple Script implementation like Things – see my digital workflow here) sold me and I switched to OF 2 and has been using it for more than 2.5 years now.

So here comes Things 3, finally out in the spring of 2017. It was beautiful but simply underwhelming. It was impossible to collapse/hide the project list. So if you were like me and have over 100 projects, the scrolling was unbearable, not even counting the other shortcoming.

Lo and behold, one year later comes along Things 3.5, which in my opinion really became the best task manager on the market. It solved the power-user issues  that plague the anterior versions. As the title of this article states, it is efficient, have an extremely clean IU (even on a small iPhone screen it look and feel uncluttered) and integrates features like your calendar in ways that are simply effective and beautiful. The idea of integration with your calendar was already in OF 2 years ago but nothing as elegant as Things 3 managed, and OF 3 seems to have made this feature worse. In the following we will explore these aspects.

The figures above gives an overview of the interface for Things 3 macOS and iOS. The left side bar on the macOS application is the same as the main screen of the iOS app. While the iPad version (not shown here) looks more like the macOS. On iOS once you have selected a view (Today, Inbox, …), the view becomes similar to the right panel of the macOS. The big difference is the tags. What  you see in the top left of the macOS is a list of all tags associated to tasks listed in this view. You can filter by simply selecting those of interest to you. In iOS, this is done via a pull down menu in the top right of the screen that gives you access to “Filter by Tag” option as shown below. 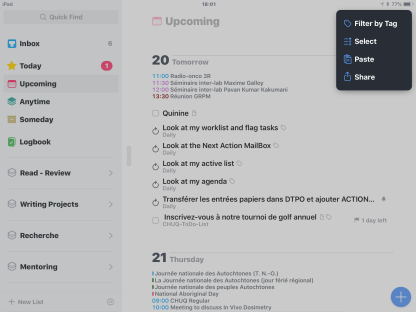 All of this keeps everything clean and also quite intuitive to use. The macOS view shown in that figure also provide an exemple of the Forecast view in Things. The calendar entries at neatly listed below each date followed by the task themselves. It is very easy to decrypt what is what. This is in contrast with the implementation chosen by OF 2 and OF 3 shown below, with OF 3 mixing calendar entries and tasks. The overall visual of Things 3 is well thought of.

The Inbox plays the obvious role of task collection until you have decided what to do with it: create a new project, assign a task to a project and tag(s) and so on. A nice touch in this new version, is that the task stays listed in this Inbox as you assigned it. These tasks are moved at the end of the section, easy to access and further modify as needed. This really helps tracking actions done on these incoming tasks.

Today (and This Evening!) [Aujourd’hui and Ce Soir in French!]

The today view (iOS – iPhone version shown above) is presenting the user with an uncluttered view of agenda items and tasks to be performed during the day. Normally, this area should not contains only task pre-populated for you based on deadline i.e. you should not only be working on last minute tasks. If this is you case, you might need a good discussion with yourself about all the commitments you are taking and start to learn to say no once in a while.

Instead of good fraction of the task in this view, should be planned by you based on all available tasks and context (where you are, you energy level, priority, …).

Another nice visual cue in this window is the little moon symbol, or This Evening where you can move some tasks to later during the day.

Finally, any tasks not done Today are roll over in the next day unless you remove the Today assignment, reschedule or remove the task.

Someday is exactly what is say. These are inactive projects/tasks that you might take up…someday.

The Logbook keep all of you completed tasks and projects. You can search all of it, including by Tags (as with all of the other views)

An interesting thing, if you have the real estate spaces e.g. a 27’’+ screen, you can have multiple separate views in a dedicated « space » on macOS, like the example of the set-up I use at work and home: Today, Inbox and Forecast views all at the same time!