In a previous blog post, I suggested to my younger colleagues that while they should not care so much about the impact factor of the journals they published in (as long as these journals are well-read in their respective fields of research), they should care quite a lot about these papers being cited, and cited by others not self-cited!

A few months ago, I was listening to the introductory talk of for a prestigious award from our national organization when one statement hit me: a physicist with 2000 or more citations is part of the 1% most cited physicists worldwide. There might have been a bit more to that statement but let’s work with it.

In fact, if you search for highly cited research on Google or any of your favorite search engines, this question (and many related ones) is the subject of intense research in itself. It seems, we human like to be able to put a number and rank on things. We also like to establish a hierarchy among things, even human being. 😉

So according to Wikipedia, from January 2000 to February 2010, the top 1% researchers in physics had about 2073 citations or better, or about slightly fewer than 210 citations per year over a 10-year period. That threshold changes with the field of research, of course, and can be much lower for other fields.

My first impression was that this seems low. However, as one digs deeper, one notices that most published manuscripts are not cited at all…Nature had a nice piece in 2014 about the TOP 100 papers. The infographics below is part of the article and is quite telling. 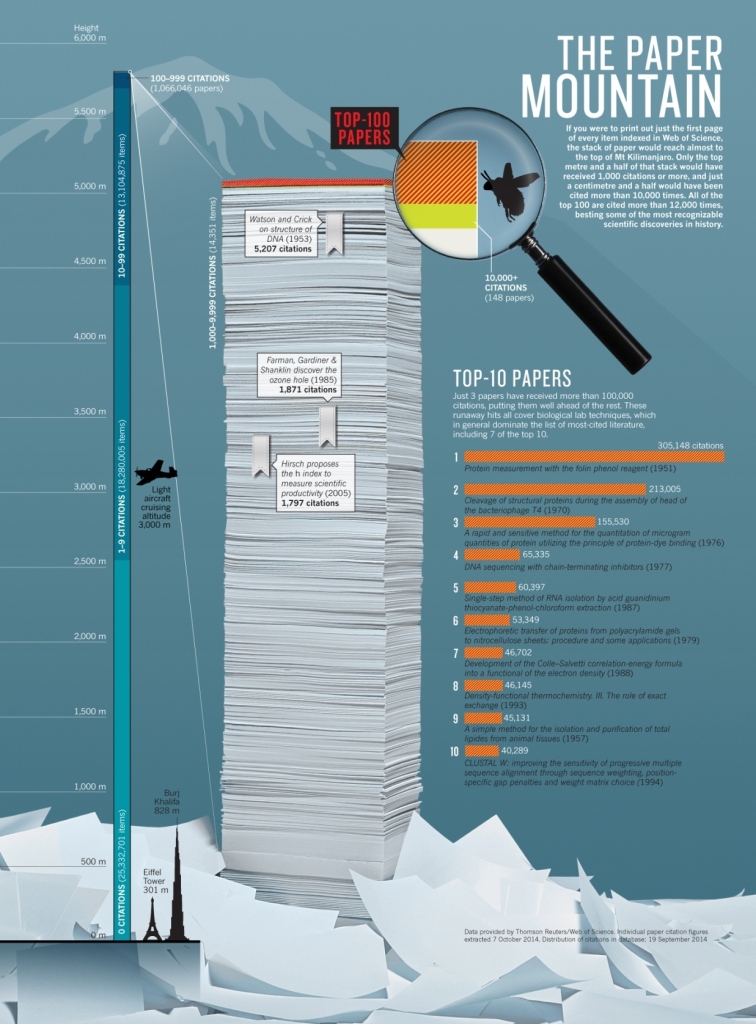 First, almost 44% of all published manuscripts are never cited. If you have even 1 citations for a manuscript you are already (almost!) in the top half (top 55.8%). With 10 or more citations, your work is now in the top 24% of the most cited work worldwide; this increased to the top 1.8% as you reach 100 or more citations. Main take home message: the average citation per manuscript is clearly below 10!

I also found a great blog post by Scott Weingart, which by restricting his analysis to a single journal, Scientometrics, got very similar results, with 50% of all published papers in that journal having fewer than 4 citations, 70% fewer than 7.

Out of curiosity, I decided to look at my own publications. Two tools are available Google Scholar and Thomson Reuters Web of Sciences. These data are presented in the figure below. As expected the number of manuscripts that gather over 100 citations are few. In my case it hovers between 2% to 5% depending on the tool used; both gives over 60% for 10 or more citations: 2 to 5 manuscripts out of a 100 get to be in the top 1.8% most cited manuscripts and 60 out of the same 100 are in the top quarter. Based on the discussion above, I suppose this is a good sign… 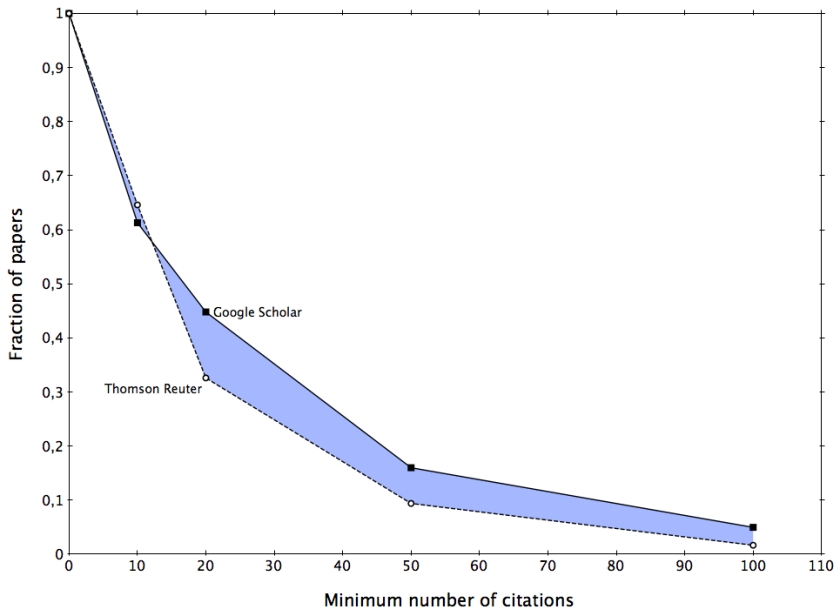 Still in Nature, there was yet another piece about the TOP 1% in science. Here is it claimed that fewer than 1% of all researchers have published consistently every year between 1996 and 2011, but those few who have commanded a “market share”  of (i.e. are authors on) 41% of all published manuscripts in the same period (original manuscript in PLOS ONE).

There is, of course, Thomson Reuters that has its own version of the “World’s Most Influential Scientific Mind” for a given year (e.g. 2014) and highly cited researchers. Here “hot papers” are defined by being in the top 0.1% (you’ve read correctly) by citations for their field of research and “influential researchers” are those having the largest numbers of these “hot papers” (generally 15+). Before you ask, no I am not listed in the 3500 or so researchers described in there…

Now having said all that, more analysis of all of these “metrics” seems to indicate that there is only a weak correlation between the top 1% of highly cited researchers and Nobel Prize winners. As noted by the first Nature article cited above, many of the very highly cited papers are about tools or methods rather than fundamental scientific discoveries made with these tools or methods…

Here is a quick one that was part of a discussion among friends: two researchers have each a paper with 200+ citations. For the purpose of this blog post let’s say exactly 200 citations. One is for a paper published in what is considered a top journal, let’s say Science or Nature. The other for a manuscript published in a low impact factor journal (5-year IF of 2). Which of these two papers have had:

Looking forward to reading you!